So today was a really fun day as the whole family went on a road trip to Phoenix park.
We left the house at 10 in the morning and everybody was so excited.

When we arrived to the park there was so many people they were all running, cycling and doing various exercises. There were huge fields that I wanted to go with Gina and have a little jog but I noticed that there was a signs that dogs are not allowed to go beyond that point as there were 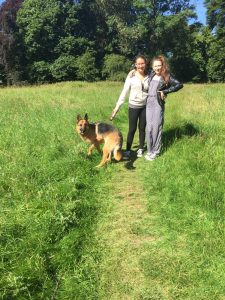 deers protecting their fawns.
I was disappointed a little bit, but then my mum and sister found a road going towards a lake, so we went there Gina was so excited, sniffing everything around.
She didn’t want to get into the water and I didn’t force her to do so. I’ve noticed there was a wild duck swimming in the lake with her two babies, and when Gina saw them she was fascinated by them.

Then we decided to go to the woods and to be honest we got lost a little bit. We didn’t know where to go but we heard some people talking and just followed the sounds and we found a main road and just kept walking down.

We went back to the car where my dad was sitting as his leg was sore, and gave Gina some water as she was extremely thirsty, I had some water too. We jumped into the car and drove to a different part of the park. It was nice as there was not much people there and we could freely run around and have some fun.
However, after around 20 minutes a large group of people came to the field and started playing

football on the whole grass area, we got pissed off a little bit, but what can you do.
We went for a small walk just before going home.

We got home at 12 o’clock and it was way too hot for Gina to go for a walk, so we decided to stay home and play with her in the back garden where she always has access to fresh water and shade.

I hope you all keep your dogs in shade during those warm days and NEVER leave your dog in a car alone.