Gina, my mum and I got up at 5:45 in the morning and drove to the beach for a little jog as the weather was beautiful.

We arrived at the beach at 6 in the morning, there was only few people, we only heard the sound of the sea. It was so calming. I think everybody should try that. Getting up early in the morning and going to the beach it’s like a therapy.

We took few toys with us for Gina and ran to the beach. The sea was extremely far away so we were running for a some time to get to the water.

Even though it was so early I could feel the sun burning my skin. It was really warm, but nothing will beat the midday sun which went up to 30 degrees. 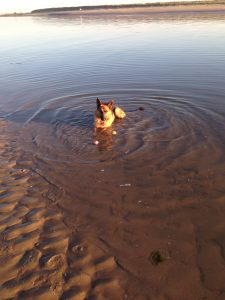 At home it was so hot that Gina didn’t know where to hide from all that heat. We had all the fans on, all the windows and doors open and it still felt like we were in sauna. I’m not complaining, I love sun but yesterday was too hot.

When we came back from the beach, I made breakfast for myself and Gina, then we had small power snooze. Because my head was killing me and still is.

We got up around 10/11 am and went for a quick walk around the estate as it was already 25 degrees outside. Gina didn’t even want to play as she always does. All she wanted to do is to hide in a shade and drink cold water. Poor Gina.

I have seen people walking their dogs during the highest temperature and I just felt sorry for the dogs as I could see that they are struggling to catch a breath. Not only that their little feet were probably burning as the path would heat up to crazy temperatures. Humans don’t feel that as we are wearing shoes that protects us from the heat but dogs don’t. So next time when you decide to take your doggie for a walk in a hot weather think twice.