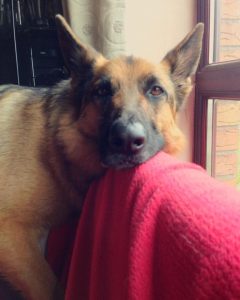 So Gina is a German shepherd which we adopted when she was about 8 weeks old. She was the cutest puppy ever. She was really active and hyper puppy, wanting to play all the time.

After about 2 months I have noticed that she is getting a small spots on her belly I was worried as I didn’t know what it was. So I went to the vet with her when she was due to a vaccination and told the vet about my findings. The vet said it’s just a small rash and gave me a cream which was really good at first. I’ve been using it for a while as the spots kept coming back, but when I applied the cream they disappeared.

The spots disappeared for few months, and I though “great she’s finally healthy”. Few months ago the spots came back but they were ten times worse. They were black and had puss in them I was terrified when I seen them. I rang the vet immediately to book an appointment. The vet looked at Gina’s skin and said that those spots are infected as they were full of puss. The vet then prescribed me antibiotics and anti-inflammatory tablets to give her for a week.

The tablets helped Gina for a while, but when we stopped giving her the medication the spots immediately came back, affecting underarms now. The vets were giving us tablets all the time and one time I said that I want a skin scrape done on Gina to find out what is causing them spots to appear all the time.

Few weeks after, the results came back saying that Gina has a staphylococcus in her skin a bacteria causing the skin problems. The vet said that she might be allergic to something. We changed her diet completely. The vet prescribed us a specialized food to give her for two months.
At first I mixed her dry food with a half of a can of wet food for a week and then after I was reducing the amount of wet food until she was eating just dry food. She didn’t like but it was the best for her health. Eventually she liked it.

Then I decided why not give her vegetables with the dry food, since she loves carrots, broccoli and other veggies. So I began mixing raw carrots and broccoli with a table spoon of olive oil and water and blended it all together in a mixer. And she absolutely loved it. Since then she didn’t have any skin problems, which I’m really happy about. Her coat is shiny and her skin healthy.

At the end we found out that she’s allergic to diary as we stopped giving her cheese. I know it’s bad but it was a half a slice of cheese once in a while. But we stopped it and she’s all good now.

Hopefully she’ll stay healthy for the lest of her doggie life.