On Thursday night when I was talking to Chris on Skype, I had a crazy idea. Why not surprise Chris on Friday by coming up to Cork.

I was thinking about that all night, and then on Friday morning I decided to book a go bus ticket online which was €17 one way ;o I know it’s so expensive but it was a non – stop bus and I have to admit it was pretty fast. The journey was exactly 3 hours no more no less. I was impressed by that.

I packed my things on Friday morning and my mum dropped me to the bus station. Of course I didn’t bring my jacket with me, as I thought it’s going to be warm as it was for a while. I regretted not bringing my jacket with me as soon as I got on the bus. It was totally freezing in there.

I wanted to sleep so bad, my eyes were closing and my head falling but I couldn’t because it was so cold as the bus driver had the window open through the whole journey, and I thought I’m going to get hypothermia. Seriously. Thank god I brought an extra sweater with me but still I was cold.
So I got to Cork and ran to get my second bus to get to the apartment. On the way I rang Chris to ask did he finish work yet, but unfortunately he said he’s staying in work till 6 as he had to make some calls. Obviously he didn’t know I was coming up. I was sad, but excited at the same time, so I told him come home quick as I’m in Cork right now. I could hear him being extremely happy, but he couldn’t show it as his boss was sitting beside him.

While I was walking home I heard a loud BANG, then I looked to the left and a small bird flew into a window and dropped on the ground. He was still alive, moving but I couldn’t leave him there all alone.

So I decided to wrap him in my sweater and bring him home. While I was walking I was checking if he’s breathing. He was breathing until I got to the apartment I took a small box and placed him inside it with the sweater wrapped around him. When I placed him there he stopped breathing.

I was shocked as he was alive like 2 second ago. That was heart breaking.

Then suddenly Chris came home. He said he couldn’t wait till 6 to see me. I was extremely happy when I seen him. But then I told him about that bird. We both decided to put him back underneath a bush.We wanted to bury him but there was no place anywhere. That was really sad.

After that Chris and I decided to get a dinner as both of us were starving. We went to a Chinese restaurant as Chris was telling me that they have the best food ever. It was good but it wasn’t amazing.

Then we went home, watched some fails on YouTube and went to sleep, as we were driving to Dublin on Saturday morning to see Gina.

She was extremely happy when she saw Chris, she loves 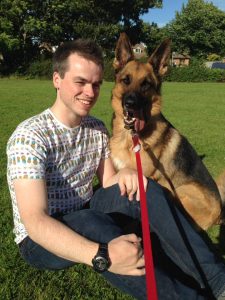 him so much. We went with her for a long walk. We didn’t walk far from home as it was extremely hot outside and we didn’t have any water with us, to cool her down.

However, it was a really nice day today and I hope everybody had nice day too. What did you do with your furry friend? Tell me in a comment!;)